Kasol and Spiti valley are two heavy weights when it comes to tourist places in Himachal. While Kasol is a typical mid Himalayan hamlet gone hippie, Spiti is a cold desert with eccentric tribal culture and incredibly kind people. So here I am comparing Kasol vs Spiti to help my fellow travelers.

Based on experience of traveling to both Spiti and Kasol, I am curating this comparison blog based on several aspects like ease of reach, places to visit, hiking options, stay options, budget travel, internet connectivity etc. So lets dive into it. 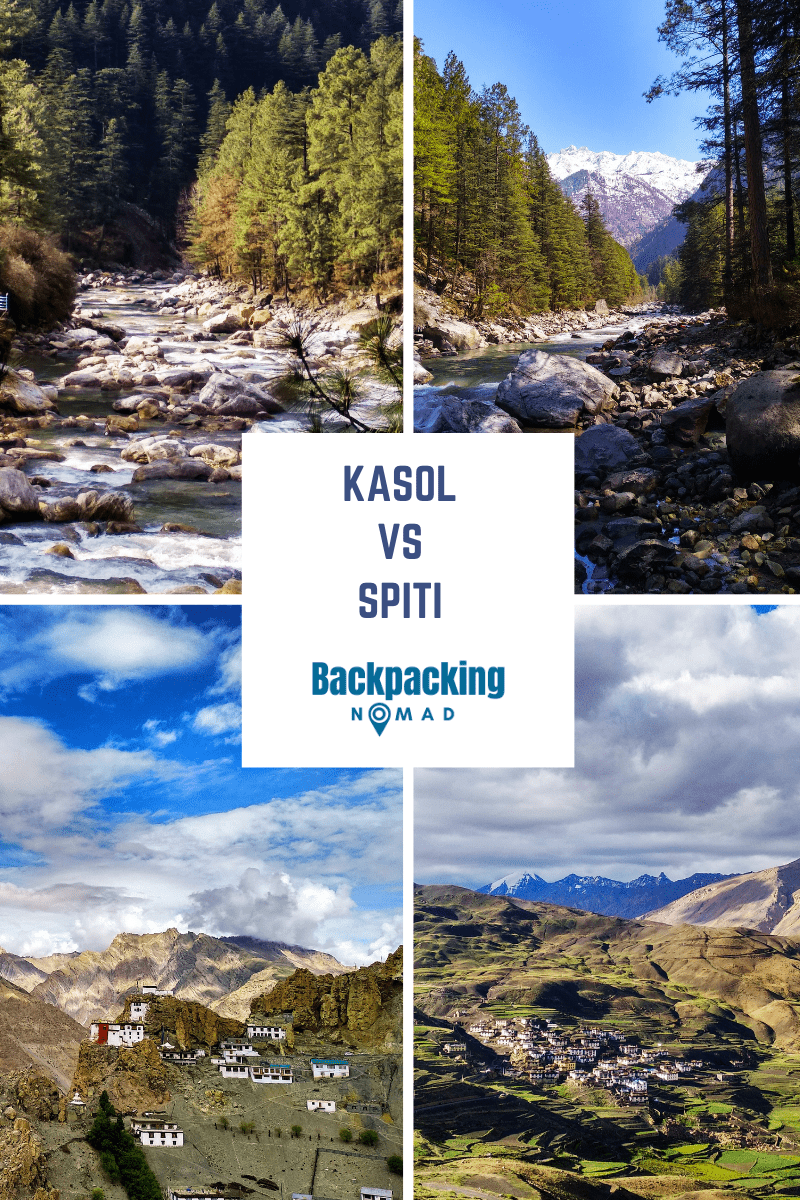 Kasol Vs Spiti – All You Need To Know

When it comes to the popular places in Himachal, Spiti and Kasol always pop up. Both are vastly different. Be it geographically or culturally.

So if you are having trouble deciding whether you should visit Kasol or Spiti, Here is a comparison blog which I am curating based out of my experiences and travels to Kasol and Spiti.

Kasol Vs Spiti – Ease of reach

Kasol is the clear winner here when it comes to the ease of reach. As you can reach Kasol within 14 hours or an overnight journey.

For Spiti, you need at least 2 days no matter which route you choose. Plus the shortest route which is the Manali-Kaza route is open only for 4-5 months in an year.

The route via Shimla and Kinnaur although open throughout the year takes a bit longer for one to reach. As people usually side track and add places in Baspa valley in their itinerary.

So if you are looking for a short trip or quick getaway Spiti will not be ideal destiantion since most of your time will be eaten up in commuting. A quick 3-4 day getaway is possible when it comes to Kasol.

By the way, here is a detailed blog on best routes to Spiti. Trust me this will be of a great help to people visiting Spiti for the first time.

Is Kasol Better OR Spiti – In Terms of Landscape

Comparing Spiti and Kasol is kind of like comparing apple and oranges. Kasol is mid Himalayan tourist resort perched at around 1500 m Parvati valley surrounded by dreamy Deodhar forests and high mountains visible in the distance.

While Spiti valley is high altitude cold desert with huge glaciers, incredible peaks and beautiful rivulets and river with an average elevation of 3300 m. To be really honest the landscapes in Spiti appear otherworldly.

Landscapes like Kasol can be pretty found in any mid-Himalayan village or tourist resort. But Landscapes of Spiti are truly eccentric and otherworldly in my opinion.

So my personal preference would surely go to Spiti. But technically speaking there is a vast difference between the landcapes of Spiti and Kasol and they probably should not be compared. But we still do.

By the way, here is detailed comparison post of Parvati valley and its neigbour Tirthan valley, I am sure this will be quite helpful to you guys.

Kasol Versus Spiti – Which Is Lesser Crowded

Kasol is the biggest tourist resort in Kullu district after Manali. So naturally, hordes of travelers both international and domestic flock Kasol each year.

Spiti although popular still does not attract the huge number of travelers like Kasol does. The reason being, that it is not that easy to reach thanks to its remoteness. Plus the weather is not favourable for most part of the year.

So even though Spiti gets kind of crowded during a couple of summer months, during the rest of the year there is only a small number of travelers visiting Spiti thanks to its hostile weather.

By the way, here is a detailed comparison blog on two of the most famous places in Parvati valley i.e Tosh and Malana.

Kasol OR Spiti – Places To Visit

There is no dearth of insanely picturesque places to visit both in Spiti and Kasol. But as I said mentioned earlier for me places in and around are truly impeccable and more scenic than Kasol.

Here is a comprehensive list of 31 beautiful places to visit near Spiti. I am sure you’ll love this one.

In Kasol you can get different type of accommodation options like hotels, cottages, guesthouses and hostels as per your budget. The reason being, Kasol has been on the tourist map since the past two decades.

In Spiti you can only find varied type of accommodation in Kaza and Tabo. Most of the other villages in Spiti only have pure homestays or homestay like guesthouses. So do keep this in mind.

Semi-luxury kind of properties like Zostel homes have started to pop up in Spiti. But as I said earlier they are limited to popular places like Kaza, Tabo, Kibber etc.

Also there are backpackers hostel in the main town of Spiti which is Kaza. Apart from Kaza, there are no hostels in Spiti yet.

Is Kasol Better OR Spiti for Budget Travelers

Both Spiti and Kasol are great destinations for budget travel. In Kasol there are plenty of inexpensive guesthouses, hotels and hostels which apart from peak season in summers are nominally priced.

Apart from Kaza and Tabo, most of the other villages in Spiti are purely homestays or homestay like guesthouses which you can definitely get at a decent price.

You can easily get a dorm bed in Kasol at around 350-500 INR. Food should cost you around INR 250 if you don’t at eat the cafes in Kasol. So you can easily limit your spending in Kasol for around INR 700 per day.

While in Spiti if you stay at homestays, then you both food and stay should cost you around INR 600-800. So staying in homestays is always budget friendly.

Here is detailed blog on a how much a Kasol trip costs and how to visit Spiti on a budget. This will surely be quite useful for first timers

So Kasol is a clear winner in this department. There are several awesome cafes in Kasol which serve lip-smacking delicacies across several cuisines. Same cannot be said about Spiti.

Except for Tabo and Kaza, there are not many cafes. And anyways Spiti is not your typical touristy place where you would go cafe hopping. But still you can find decent in house cafes in hostels in Kaza like Zostel.

By the way, here is a detailed comparison post on the famous tourist resort Kasol vs Jibhi which is fast catching.

Which Is A Better Family Friendly Destination – Kasol Vs Spiti

Spiti is without a doubt a better destination when it comes to a family friendly destination. Even though Kasol is relatively safe, it is infamous for its free flow hash.

So much so that it can be also called as smokers hub with authorities turning a blind eye. And obviously no family would be very comfortable with people openly consuming banned substance in public, cafes etc.

With Spiti there are no such problems at all. In fact, if you stay at homestays you won’t even feel that you have come to a tourist place. People coming petty crimes in Spiti is unfathomable let alone heinous one.

So in my opinion if you want a quaint getaway away to spend some quality time with family Spiti valley should be your ideal choice if you would ask me.

If you are planning to visit Kasol with family, here is a detailed blog “Is Kasol a family friendly destination“.

Is Kasol Safer OR Spiti

While Kasol and Spiti both are relatively safer than most of the parts of India, Spiti is probably more safer and infact the safest place to travel to India.

Thanks to the Spiti being a tribal region, close-knit community, and tough living conditions crime is almost non-existent.

While Kasol thanks to being dubbed as the smoking (hash) capital of India, is often in the news for all the wrong reasons. But with that being said, Kasol is still one of the safest places in the country if you stay away from all the illegal stuff.

But there are other dangers in Spiti thanks to its harsh geographic and climatic conditions, So here is a detailed blog about several safety aspects in Spiti.

Kasol Vs Spiti – Trekking and Hiking

Both of Spiti and Kasol are know of for insanely adventurous trekking and hiking routes. In fact there is a 100 km trek called Pin Parvati pass which starts from Barshaini in Parvati valley near Kasol and ends at Mudh village in Pin valley, Spiti.

This trek should be enough for one to see the stark difference between lush green landscapes of Parvati valley and Barren cold desert like vistas of Spiti.

Hands down you should visit Spiti as a winter destination if you can bear the cold. Winter scapes of Spiti are just otherworldly as you can witness all the high mountains donning a white blanket of snow up close making it a true winter wonderland.

Kasol is your typically mid-Himalayan hamlet and you can experience winters like Kasol at many places in Himachal, Uttarakhand, Kashmir. Plus it only snows in Kasol for the months of December and January.

The only real deal-breakar for a winter Spiti trip is the bone chilling cold. Temperatures usually drop to around -25 degrees just in Kaza during the peak winter months. And a lot of places are inaccessible due to snow.

But again, if you can bear cold and undergo some hardships, trust me a winter trip to Spiti will be forever etched in your memory.

Is Kasol Better OR Spiti – In Terms of Internet Connectivity

Kasol easily triumphs Spiti when it comes internet and mobile connectivity. You get 4g connectivity for major mobile networks in India like Jio, Airtel, Vodafone.

As far as Spiti is concerned it was only 2020 when Jio 4g made its arrival in Kaza and nearby areas. Before 2020 only BSNL would work in Spiti and that too you could only make calls.

So if internet is your priority you’ll face no problems as such. But in Spiti most of the places of interest will be devoid of internet.

Here is a detailed blog on which mobile network is best for Himachal. I am sure this will be of a great help to you guys.

Kasol Vs Spiti – In Terms of Number of Days

If you are looking for a quick getaway to the mountains, Spiti valley will not be an ideal destination. As you might already that it takes at least a couple of days to reach Spiti.

So at least 4 days worth of time will be used up in traveling to and exiting Spiti itself. So if you want to make a trip to Spiti, I would suggest you have at least 10-12 days at your helm to experience Spiti.

While a quick getaway to Kasol is really possible. As you need only an overnight bus journey to reach Kasol. But ideally if you had a week, you would be able to explore Kasol and places around it a bit better.

So if you want to have quick trip head to Kasol and nearby places in Parvati valley. And have at least 10 days for Spiti trip. If you have more than 10 days for both Spiti and Kasol, nothing like it.

To conclude I was able to put forth a decent comparison between Kasol and Spiti. As I said earlier both are vastly different both geographically and cultural.

Kasol is a proper tourist resort while Spiti is a remote high altitude valley with rich tribal culture and incredibly kind people. In case you have any doubts, do reach out to me in the comments below.